It was a Saturday afternoon at Melas Park in Mount Prospect, IL and the weather was holding up as La Cocinita catered a large pet festival. I had to hike across a parking lot and through a field of barking pups to get to this bright red truck, which was parked on a concrete pathway, but it was well worth it. La Cocinita means “The Kitchen” in Spanish, and it is the only food truck in Chicago serving up “arepas.”

An arepa is a flatbread made of ground maize dough or cooked flour that can be fried or steamed and then stuffed with meat or cheese. They use a very simple recipe that involves cooking the arepas on a griddle after mixing maize corn flour with salt, warm water and a touch of oil. The mix is then formed into patties and cooked on each side for 15 minutes. When served, the arepas are sliced open like a pita pocket and stuffed with meat or cheese of your choice.

The La Cocinitas menu is very straightforward – pick your vessel, pick your protein and pick your sauce. A vessel is a bowl, filled with rice, vegetarian black beans and cheese, while protein options include carne asada and braised pork. The sauce that raised my eyebrows was the, “Guasacaca,” guacamole made with avocado, green pepper, white onion and a little bit of vinegar that is blended into a cream. The sauce is blended and made fresh to order while you wait for your meal.

Alex Sanchez, the manager, suggested the special: two arepas stuffed with braised lechon (pork), topped with a Chipotle crema and cabbage slaw, so I gave it a shot and I was not disappointed. The pork fat melted on my tongue and the crispness of the cabbage slaw kept me going back for more. While the arepa patty is quite light and did not sit heavy in my stomach. With 4 stars on Yelp and the flavors to back it up, La Cocinita left an everlasting impression on my taste buds.

Benoit Angulo and his wife Rachel are the geniuses behind these mouthwatering masterpieces. A few years back, Rachel moved down to New Orleans to be a social worker after finishing grad school, and got a part-time job at a local restaurant where she met her now husband, Benoit Angulo. Angulo himself grew up in Curacao, Venezuela and has been making arepas since the age of eight. He attended culinary school and has always been a master in the “La Cocinita” food truck.

He and his wife shared a passion for Venezuelan cuisine and decided to start a food truck back in 2011. The couple bought a used food truck that was previously used to sell Italian sandwiches down in Florida. With the kitchen was already built-in, the Angulo’s only needed to do minor restoration. Shortly after La Cocinita rolled out on the streets of New Orleans for Mardi Gras, it wasn’t long before the husband and wife duo had the idea to open a second truck in Rachel’s hometown of Chicago.

Very similar to the movie “Chef,” the Angulo’s 10-year-old daughter recently earned the job title of “culinary artist” on the truck. “She likes to garnish the tacos and she does a really nice job when she does it. It always looks perfect,” said Rachel. “She also likes taking orders, because what 10-year-old wouldn’t want to use an iPad?”

With a baby due in February, the Angulo family is not only eager to expand their family, but they are eager to expand their business as well. They are looking to be more catering accessible and passionately desire a brick-and-mortar restaurant to call their own someday. Without question, Chicago and all of the surrounding neighborhoods will be extremely lucky once their dreams come to fruition. 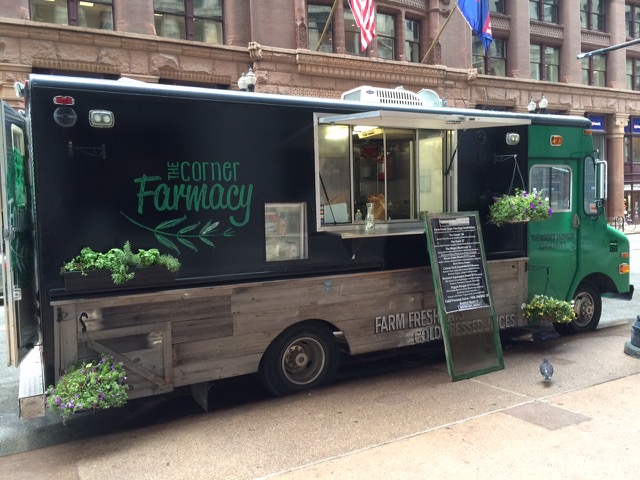 It was a rainy and dreary Wednesday morning until I came across a bright green beacon of optimism, The Corner...