Long considered a staple of American cuisine, the hamburger has just gotten a French makeover. Le Camion Gourmand, a food truck located in Montreuil, a town on the edge of Paris, uses homemade sauces and local cheeses to transform a traditional burger into something new and unmistakably French. The perfect example of this fusion of American and French styles is Le Camion Gourmand’s “burger of the week”.

Jean and Stefan, the truck’s co-founders, top this concoction with chevre and honey, a combination often used as a pizza topping in Paris. This pairing is then combined with caramelized onions and pickles which represent the classic American style of hamburgers. It is a successful marriage due to the creaminess of the goat cheese and the sweetness of the honey, which perfectly complement the caramelized onions. The bun, made by an American baker, is fluffy and soft like brioche, but not quite as rich.

The idea for Le Camion Gourmand dates back to a student trip that Jean and Stefan took in New York City. At the time, there were no food trucks in Paris, and the two young chefs instantly fell in love with the convenience and quality of mobile cuisine. Since the conditions that make food trucks successful in New York also exist in Paris, the duo decided to bring the idea back to their hometown.

They chose hamburgers, because they’re delicious and flexible—an edible canvas for showcasing French flavors. Since opening two years ago, Le Camion Gourmand has sourced all of its meat, cheese, and vegetables from local producers. The sauces and fries, which have just the right amount of curly fry-esque seasoning, are all homemade. When Le Camion Gourmand first hit the streets, Jean and Stefan opened in Montreuil because the mayor of Paris at the time was not open to food trucks. Since then, a new mayor has been elected who recognizes the potential that the last mayor could not see. As a result, Jean and Stefan are very excited about the possibility of opening up shop within Paris itself. They are also trying to regulate this growing new phenomenon by creating their own association of food trucks that ensures quality and fairness among its members. Similar to the burger of the week, Jean and Stefan incorporate traditional French flavors in the “poivre” burger. The chefs use sauce au poivre (pepper sauce), a traditional French accompaniment with steak, as well as Beaufort cheese. The pepper sauce was a really interesting change from the usual selection of hamburger sauces, but the cheese is what makes it special. Thick, creamy, and rich, the huge slab of Beaufort cheese that Jean and Stefan use for this dish really sets it apart from the average cheeseburger.

It is impressive how they have used French sauces and cheeses to elevate one of the staples of American cuisine. The only problem is that I’m not sure if I’ll be able to go back to ketchup and American cheese after this. 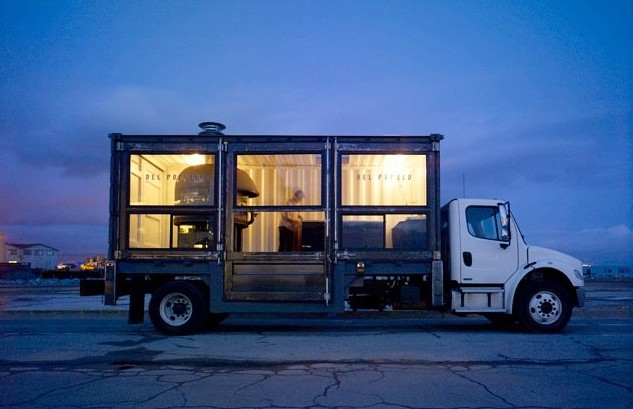 5 Most Unique Food Trucks and Where to Find Them

Whether you’re a devoted food truck follower or new to the game, it’s obvious the food truck craze isn’t going...