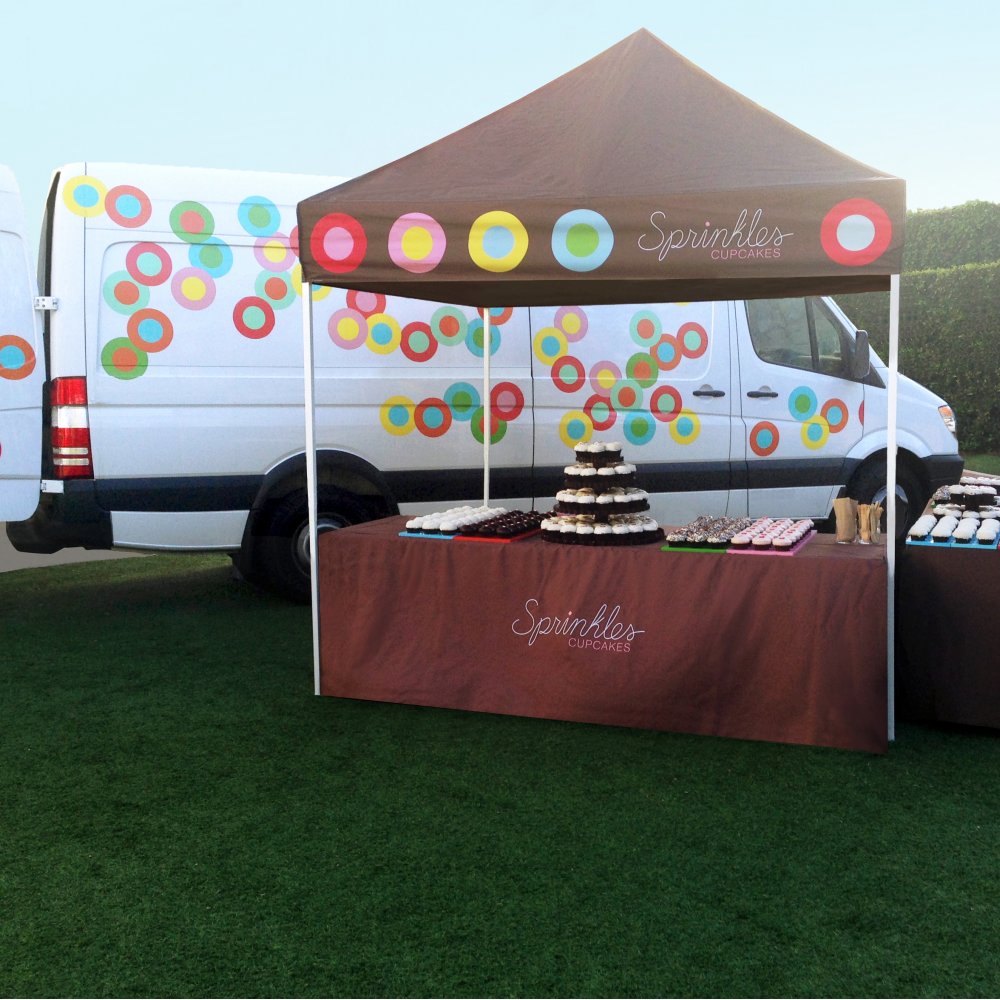 You go bananas at the delicious expectation of old fashioned banana bread baking in the oven. Sprinkles' take on this comfort food bakes perfectly ripe bananas into a rich, golden-hued cake. Topped with luscious vanilla, chocolate or peanut butter frosting, you'll be &quot;banana split&quot; over which is your favorite!

You go bananas at the delicious expectation of old fashioned banana bread baking in the oven. Sprinkles take on this comfort food bakes perfectly ripe bananas into a rich, golden-hued cake. Topped with luscious vanilla, chocolate or peanut butter frosting, you'll be &quot;banana split&quot; over which is your favorite!

You go bananas at the delicious expectation of old fashioned banana bread baking in the oven. Sprinkles take on this comfort food bakes perfectly ripe bananas into a rich, golden-hued cake. Topped with luscious vanilla, chocolate or peanut butter frosting, you'll be &quot;banana split&quot; over which is your favorite!

Yin and yang explains that light cannot exist without darkness, hot without cold, and chocolate without vanilla. Sprinkles Black and White cupcakes create a harmonious balance between Belgian dark chocolate cake and creamy vanilla frosting. As the proverb goes, two parts united together give rise to something better!

Children may run upon hearing a vegetable has made its way into their cupcake, but do you know the secret? Carrots' hidden sugar content make them a baker's ally! Our recipe blends fragrant spices with freshly grated carrots and toasted walnuts. Coated with a generous heap of cinnamon cream cheese frosting, you might even convince the kids to eat their vegetables!

You've been saving up for an exotic escapade to the Far East where you plan to gaze upon the Taj Mahal while sipping traditional Masala Chai tea. Until your travels take you to India, enjoy a Sprinkles Chai Latte cupcake! This aromatic cake is spiced with a warm blend of cardamom, cloves, anise, ginger and cinnamon and topped with sweet Chai frosting. So colorful and breathtaking, you may have stumbled upon the 8th Wonder of the World!

Angels add their touch to devil's food with Sprinkles Chocolate Coconut cupcakes! This sinfully tempting Belgian dark chocolate cake is topped with divine coconut cream cheese frosting and fluffy coconut shreds. A match made in heaven, you'll travel to the ends of the earth to find one!

Your friends may be frosting fanatics, but you are definitely a cake connoisseur. So skip the frosting and dive into a Cinnamon Sugar cupcake! The understated sweetness of this lightly spiced buttermilk cupcake is balanced by a glimmering coat of cinnamon sugar. With no frosting to get in the way, enjoy the complexity of this perfectly airy cake!

In the hustle and bustle of your big day, you forgot to save a slice of cake for your anniversary. Let that snafu fade into oblivion by serving up Sprinkles Coconut cupcakes. A wedding favorite, this pure Madagascar Bourbon vanilla cake is topped with coconut cream cheese frosting and beautifully shredded coconut flakes. Your anticipation of this moist and flavorful cake will guarantee you never forget an anniversary!

After late nights dancing in Havana, morning always comes too soon. Wake up with Sprinkles Cuban Coffee cupcakes! This Belgian light chocolate cake is topped with powerful dark roast coffee frosting and subtle notes of cinnamon and cocoa. Just add a glass of milk to turn your café cubano into a cafecito!

When life hands you lemons, it's time to bake cupcakes! Sprinkles Lemon cupcakes are bursting with the tangy essence of juicy California lemons and topped with a lemon-vanilla frosting flecked with zest. So fruity and refreshing, you'll never feel sour with one in sight!

What one item would you bring to a deserted island? Sprinkles Lemon Coconut cupcakes, of course! Unwind under a palm tree with this Madagascar Bourbon vanilla cake topped with lemon coconut cream cheese frosting. Sprinkled with fresh coconut shreds, you'll never want to be rescued from this tropical island paradise!

Some folks live, eat and breathe peanut butter. As far as they are concerned, a couple scoops of this creamy goodness is a sufficient meal. Sprinkles Peanut Butter Chip cupcakes are baked with these fanatics in mind! This chocolate-chip studded cake is made with all natural peanut butter and topped with decadently rich peanut butter frosting and sweet milk chocolate sprinkles. So indulgent, you – ahem, those peanut butter addicts – will go nuts!

As a child, you discovered how to dunk chocolate into the peanut butter jar and became convinced you invented a new food. Sprinkles pays tribute to your ingenuity with our Peanut Butter Chocolate cupcakes. This chocolate chip-studded cake is made with creamy, all-natural peanut butter and topped with fudgy milk chocolate cream cheese frosting. With just the right combination of salty and sweet, you should brace yourself for the onslaught of fan mail!

The flavor of pumpkin conjures up memories of crisp autumn nights and holiday gatherings with friends and family. At Sprinkles, it's a taste that never goes out of season. Our pumpkin cake is laced with fragrant ginger, clove, nutmeg and cinnamon. Topped with sweet cinnamon cream cheese frosting, Sprinkles Pumpkin cupcakes are sure to spice up any occasion all year long!

If one flavor is synonymous with Sprinkles Cupcakes, it is Red Velvet! Our most popular cupcake was developed by Sprinkles founder Candace Nelson as an homage to her husband Charles and his deep Oklahoma roots. As a chocolate lover, Candace upped the chocolate quotient with Callebaut cocoa, mellowing the red color to a sophisticated hue. Set against the lily white of rich cream cheese frosting, the contrast is gorgeous... if only we had the self-restraint to sit and admire it!

Sprinkles Salty Caramel cupcakes are an irresistible salty-sweet flavor combination using fleur de sel crystals hand harvested from the pristine seas off Brittany, France. These fleur de sel granules are a delightful complement to the sweet, buttery caramel which flavors both the cake and frosting. Taste the rich, delicious complexity of Sprinkles take on this classic French duo.

This cheery birthday cake is loaded with rainbow sprinkles and topped with vanilla buttercream frosting. Adorned with crunchy rainbow nonpareils, your only birthday wish will be for many more!

Tantalize your taste buds with Sprinkles Strawberry cupcakes! This juicy cupcake is made with ripe, succulent strawberries pureed into both its cake and frosting. Naturally painted pink with everyone's favorite fruit, they're as beautiful as they are sweet!

As you skip breakfast during another hustle and bustle morning, you yearn for the homemade taste of sweetly spiced pastries. Piping hot from the oven, Sprinkles introduces its twist on the old fashioned cinnamon roll with our Triple Cinnamon cupcakes! This lightly spiced buttermilk cupcake is topped with smooth cinnamon cream cheese frosting and dusted with cinnamon sugar. With layer upon layer of cinnamon goodness, you can enjoy the most important meal of the day anytime!

Purists will delight in Sprinkles Vanilla cupcakes, though our vanilla cake is anything but simple. A favorite of the bakery staff, this soft, delicate cake is perfumed by the sweet flavor of Nielsen Massey Madagascar Bourbon Vanilla for an effect that is simply... heaven.

Gather 'round the campfire for a spooky tale, Of a dark chocolate cupcake lost on a haunted trail! He noticed a shadow creeping and let out a scream, There appeared a ghost of fluffy white marshmallow cream! He ran so fast, his frosting could not take the heat And melted into a ganache, so rich and bittersweet!

You are perpetually on the hunt for the most decadent and complex chocolate gems to dazzle your sophisticated palate. Strike it &quot;rich&quot; with Sprinkles Dark Chocolate cupcakes! Ample cocoa gives this cake its intense flavor while fragrant Madagascar Bourbon vanilla adds a rich perfume. Topped with a creamy, bittersweet frosting and real chocolate sprinkles from France, the only other thing in the world you'll want is an ice cold glass of milk!

Did you know most chocolate recipes call for a dash of vanilla? Baked in unison, vanilla and chocolate enhance each other's flavor profiles. Sprinkles proves that opposites attract with this Madagascar Bourbon vanilla cake topped with fudgy milk chocolate cream cheese frosting and melt-in-your-mouth milk chocolate sprinkles. So while others debate vanilla versus chocolate, you can sit pretty enjoying the best of both worlds!

The very famous Sprinkles cupcakes now offered on the go! Street food never tasted so sweet as eating Red Velvet cupcakes curbside. Where's the milk-mobile? My great grandmother was renowned for the distinctive desserts she made at her San Francisco restaurant during the 1930's. She created pure, delicious, uncomplicated pastries – the result of her French culinary roots and her new American working life. These days, as I sift, whisk and frost at the bakery I began with my husband in Beverly Hills, I imagine our scratch-based cupcakes as a natural extension of my great grandmother's legacy. As we continue the tradition of simple and satisfying desserts handcrafted from the best ingredients – not too precious, always just right – our hope is that Sprinkles Cupcakes will conjure up lovely memories of your own childhood or family, or simply the pleasure of good taste.