It hasn’t taken much effort for Boston to become food truck capitol of New England.  With scores of college kids, along with the country’s most passionate sports fans, and a (literal) legendary bar scene, the conditions are perfect.  The foot traffic here’s plentiful, the hunger insatiable, and the spirits unshaken by even the harshest winter.

Food trucks here have plentiful clientele, but true to Boston, they’re also demanding.  So to survive, these trucks need championship-level skills and a world-class education all their own.  But the food trucks listed below aren’t just surviving, they’re positively thriving.  Run out to meet them the next time they’re parked, and grab tastes that have charmed even the toughest critics to become local legends.  In a city that doesn’t take that term (or much of anything, really) lightly.

For over six years, the Bacon Truck’s driven past competition to emerge as one of Boston’s true signature food trucks – building its menu around the simplest yet most sacred of all ingredients, and letting the results speak for themselves.  And lately those results have been speaking a lot – in 2018, the truck’s popularity crested into the creation of Charleston’s Bacon Truck Cafe, giving its fanbase access to all the prized pork it loves, all year-round.

But the truck itself still claims the juiciest cut of the action, bringing a roster of bacon-centric sandwiches, hash and even desserts (Nutella-covered bacon….for example) to masses from Brighton to Dorchester, and saving hundreds of mouths from the horrors of excess health, each and every day.

The Hangover – A fried egg sandwich topped with the truck’s bacon hash and paired with – yeah, more bacon, drowned under cheddar and havarti cheese.  In case you didn’t guess, it’s named for the very thing it wants to demolish.

2. The Chicken and Rice Guys

Another truck that’s turned hard-won street accolades into brick-and-mortar success is The Chicken and Rice Guys, which launched in 2012 as a detour from the Burrito/Pizza/Burger trifecta dominating the Greenway.  Their alternative quickly became a fresh status quo, as crowds propelled the truck’s rice plates, salads, gyros and (most importantly) white sauce to the stuff of local lore.

Halal Chicken – Scatter it over rice and top it with creamy garlic sauce to see why it’s become a late-night Faneuil Hall favorite, and a lunchtime indulgence all around town.

Of all the trucks here who’ve made the brick-and-mortar leap, this one’s the sweetest.  Obviously.  Launched by a local baker, who started professionally at 15 under her mom’s strict tutelage (and sharpened those skills serving her future husband’s entire Big Dig team), Cookie Monstah boasts scratch-made ice cream cookie sandwiches without equal in Massachusetts.  Founder Missy Gale would know – traveling up & down throughout four pregnancies to satisfy distinct cookie cravings, only to find her own recipe still reigned supreme – never over-mixed and never over-baked.

Grab her life’s work and pair it with a fresh scoop of Richardson’s ice cream, either in a cup, or sandwiched together, and taste the combo that’s made Boston just a bit sweeter (even when the Sox lose).

The Red Monstah – Mint Oreo ice cream smushed between two red velvet cookies and ready to scare cravings back to their hiding place.

Moyzilla’s been a pioneer of Asian fusion in Boston, wrapping up a wide assortment of international tastes into perfect dumpling bliss.  Launched by a financial analyst looking to bust out of the cubicle, it’s a passion project whose passion’s become contagious, turning hordes of admirers at Boston Common into devoted disciples, and bringing faraway joys to local street fairs.

Now the truck posts up all over town, dispensing creations like classic, hand-folded dumplings, Japanese fried chicken and Taiwanese beef noodle soup.  It’s a full Asian tour you don’t have to go east of the Harbor for, and packs all kinds of tastes worth roaring for.

Cheeseburger Dumpling – Drizzled in secret sauce, this one’s an east-meets-west love story that’ll melt your tastebuds as much as your heart.

A NY native that’s proven it can hang in the Hub of the Universe, Roadies began life as the Hudson Valley’s Roadies Diner.  But busier streets called, and owners William De Filippis and Erica Pratico answered, sending its menu of world-inspired eats north.  Dropping the “Diner”, along with its bulk of rotating dishes, the truck focused on its biggest hit – an all-time classic Cuban – and streamlined the rest of the menu around it.

Over three years, Roadies has served more than 25,000 Cubans through the city, and become coveted by Back Bay yuppies and Southie hipsters alike.  Altogether, Roadies is one New Yorker that’s been welcomed here with open arms.  And, more importantly, open mouths.

One of Boston’s most unique food trucks has naturally become one of its most iconic, with one-of-a-kind fusion that’s as novel as it is portable.  RiceBurg’s rice patty buns anchor a menu of delectable Pan-Asian “burgers”, ranging from bulgogi, to sweet & sour crispy chicken, to spicy tuna, to shiitake.

The truck’s curry-dusted french fries are so flavorful you can skip the ketchup, while Mala beef balls and edamame offer entirely different kinds of sides.  Altogether, RiceBurg is making Boston’s comforts both more exotic and more local at the same time.

One of the newer trucks on the scene, Melt has nonetheless quickly established itself as a must-try truck in Boston.  Combining southern flavors with northern heft, the truck’s menu is split between gourmet grilled cheeses and a rich selection of authentic poutines.

In a stroke of true genius, however, all recipes can be flipped – meaning melts can be made as poutines and poutines can be served up as melts.  Whatever flavor combo you’re drawn to can be made exactly the way you like (it just can’t be made lightly).  It goes without saying, but this is one truck to bring an appetite to.

Zaaki’s made an indelible new mark on the Boston food truck scene, bringing a 300 year-old Egyptian staple stateside for a brand new audience.  The everything-in-the-pantry charm of its main dish, Koshari, has helped Zaaki stand out from the pack, but in the Northeast’s food truck capitol, it’s taste that wins in the long run.

And it’s taste that Zaaki still wins on, whether parked at the Suffolk Downs food fair or booked for ritzy private functions in Beacon Hill.  Specifically, it’s a taste that offers something different, even on a list where different’s the norm.

Including a second grilled cheese truck on this list may seem bold, but leaving Roxy’s off would be pure folly.  For one – Roxy’s can boast being the first gourmet food truck legally allowed in Boston, through an initial loophole that allowed it to operate as a cart.  As time went on, Roxy’s helped pave the way for food trucks of all sort to thrive, as public demand became undeniable.

And it was not a path paved in butter.  Roxy’s separated itself from the melted competition (before competition even existed) by grilling with mayo instead of the gold stuff, and eliminating scores of fat and cholesterol from the finished product (while still tasting like grilled heaven).  Track down Roxy’s and grab a taste of a true original, in every way.

Launched by a married couple who came late to the whoopie pie game (not even tasting it til well into adult life), the Whoo(pie) Wagon tastes so good you’ll still swear they invented the staple.  Shortly after Mary and Chris Bandereck’s move to Topsfield, they were introduced to the Northeast treat, and it was love at first bite.  Mary had become known around town as the “Cake Lady”, for the wide assortment of hand-baked goods she supplied to a downtown market, but once she made her first pumpkin whoopie pie, her moniker was quickly altered.

Soon, the “Whoopie Pie Lady” took her wares to the Topsfield Fair, and the Whoo(pie) Wagon was quickly born.  Now the truck brings her legendary creations to the masses of Mass, launching Boston pop-ups(most recently for two weeks at The Lawn on D), and catering private functions alike.  Taste for yourself what’s made these late-bloomers the dominant force in modern whoopie pie love, and leave no doubt that late or not, all of this was destiny.

Pumpkin Whoopie Pie – The one that started it all, layered with rich, sweet spice and finished with sweet cream. 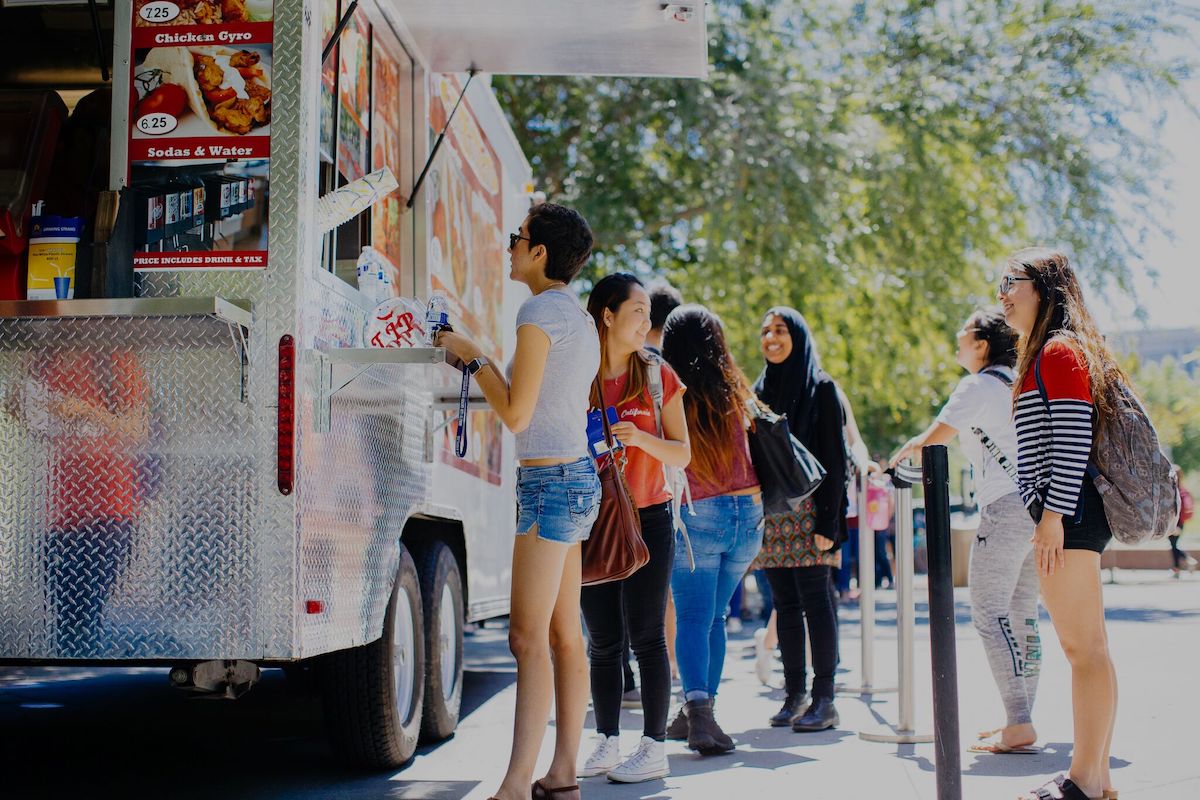 Want to bring a delicious local food truck to your school or university campus? It's super easy! Click below on...