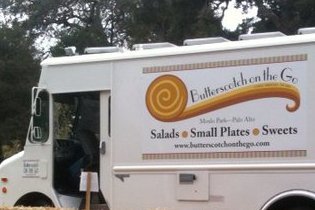 Butterscotch on the Go

About Butterscotch on the Go

After a decade as a personal chef, Kathleen Jensen decided what she really wanted to do was to focus on food and interacting with people. Maybe a food truck? Perfect! This dream became a reality with the purchase of an aging mobile kitchen which had begun its life as a Red Cross disaster relief vehicle. While the truck was being refurbished, Kathleen began a wholesale dessert business selling baked goods to local cafés. She named it “Butterscotch Bakery” in honor of her favorite flavor. After the food truck was ready for business, Butterscotch Bakery became Butterscotch on the Go. Inspired by trips to Europe and the wonderful open-faced sandwiches served in France (tartines) and Italy (bruschetta), Kathleen decided to feature them in addition to salads, seasonal soups and sweets. Whether it’s a quick bite of lunch on the go, a snack or butterscotch pudding topped with chocolate smoked almond brittle, Butterscotch on the Go brings tasty treats directly to you!