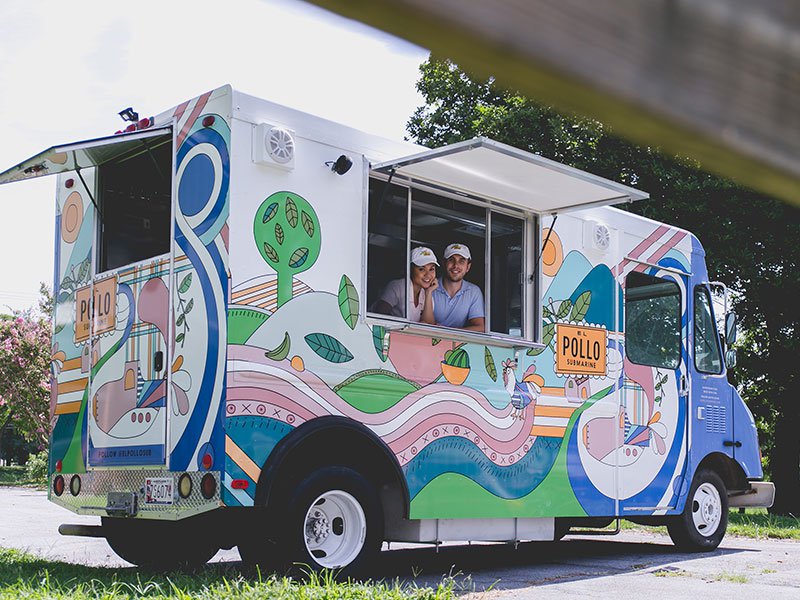 A sub roll stuffed with choice of protein, coleslaw, cucumber, and cilantro aioli. Served with a side of potato chips.

El Pollo Submarine is named after the first home-cooked meal shared by truck owners Paul and Janee - the Salvadoran chicken sub. This tasty meal is not commonly found around the restaurant scene on the East Coast of the states, so these two decided to make it a little more accessible. Their philosophy? "If good food is made with love, then it will be eaten with love." And that's just the homemade touch and passion they're infusing into every meal, serving 'em up hot and fresh out of their food truck roaming in Kensington, Maryland and beyond. At El Pollo Submarine, you're being treated to a bevy of authentic Salvadoran flavors. From the traditional cheese pupusa and pulled pork chicharron to their iconic chicken sub, each is bursting with exotic spices and seasonings that'll have your tastebuds dancing la salsa. What's more: they're making everything to order, so trust us when we say this: it'll be worth it. Track down El Pollo Submarine in Rockville, MD to transport your tastebuds to south of the border bliss. Sounds like a much needed vacation to us. MUST TRY El Pollo Submarine - the dish that started it all. A lightly toasted sub roll is stuffed with shredded chicken doused in homemade mole sauce, topped with shredded lettuce, diced radish, and their signature crafted cilantro aioli