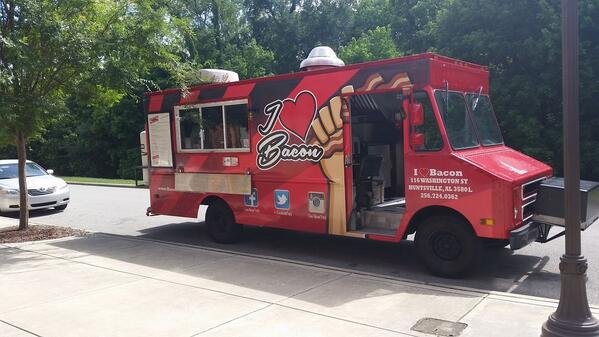 About I Love Bacon Food Truck

I Love Bacon Food Truck doesn't traffic in subtlety. It traffics in bacon. Quite literally. As literally as we've ever used the word literally, in fact. A mean pack of sandwiches lead off the menu, giving you inventive design that goes hand in hand with savory execution. But sandwiches are but one way to bacon, and I Love Bacon's got room for way more in its heart than simply sandwiches. A loaded up mac & cheese & world-class bacon tots both provide compliments to the 'wich domination, giving you a full bacon experience as deep as pork belly. Chase down I Love Bacon, wherever they roam in Huntsville, to get a taste for yourself, or better yet just book them yourself and get the full bacon bonanza for you and all your friends. Subtlety's overrated. Bacon is not. So go with bacon, and you'll always be happy. MUST TRY Penne pasta loaded with jalapeños, queso and obviously bacon. Or go even heartier, and substitute tater tots.