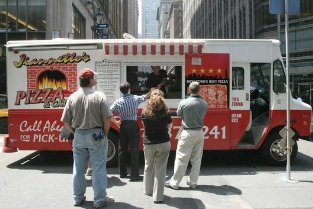 Penne with a traditional vodka sauce of crushed tomatoes, onions, prosciutto and a touch of cream. Appetizer portion size

Sautéed chicken with a lemon-butter and white wine sauce

Broccoli with garlic and oil

Penne with a traditional vodka sauce of crushed tomatoes, onions, prosciutto and a touch of cream

Penne pasta in a red sauce

Two slices of pizza with your choice of toppings.

Jiannetto’s Pizza & Catering has served as a staple in the NYC street food tradition since back in 1998, when the first iconic truck appeared on Wall Street. Now 3 Jiannetto’s trucks roam through The Big Apple, providing the people with their award-winning Grandma's Thin Crust Sicilian pies. Don't know what those are? Not to worry. Their famous four-sided slices are topped with the finest quality plum tomatoes, basil, and mozzarella to sink your teeth into, with thin crust that makes for a crisp texture you won't find just anywhere. So don't go looking. Instead, find Jiannetto's Pizza to try it yourself, or treat yourself to their other hearty specialties including hugely flavorful hero sandwiches, unforgettable Sicilian rice balls, and baked pasta dishes. Or have 'em out to cater your next event. Either way, Jiannetto's Pizza & Catering won't disappoint. MUST TRY Grandma's Pizza - just like grandma used to make, if your grandma was as awesome as Jiannetto's. This slice is loaded with juicy plum tomatoes, creamy mozz and just a hint of basil to tantalize your tastebuds