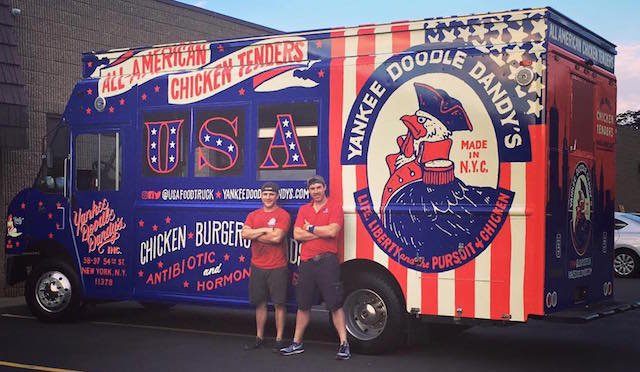 Our fresh chicken tenders served on a brioche bun, drizzled with our Spirit of '76 sauce, and topped with your choice of lettuce, tomato, cheese, pickle. Served with fries and a pickle spear.

Freshly grilled 6oz burger served on a brioche bun. Topped with your choice of lettuce, tomato, pickle, olives, ketchup, mustard, mayo, and our famous Spirit of '76 sauce. Served with fries and a pickle spear.

An American classic done right. Two pieces of Texas toast grilled to perfection with melty American cheese between. Served with fries and a pickle spear.

Our fresh chicken tenders served on two pieces of Texas toast, topped with mayo, lettuce, tomato, pickles, bacon, and a slice of American cheese. Served with fries and a pickle spear.

An American classic done right. Two pieces of Texas toast grille to perfection with melty American cheese between. Served with fries and a pickle.

Grilled chicken perfectly flavored with Cajun seasoning and drizzled with our Spirit of '76 source atop your choice of Texas toast or brioche bun. Topped with lettuce, tomato, bacon and pickle. Served with fries and a pickle spear.

4 chicken tenders, natural cut fries, Texas toast, homemade potato salad, and a side of our famous Spirit of '76 sauce.

Yankee Doodle Dandy's is an all American food truck in practically every way. Not only do they serve those all American classics, they've also got an all American backstory, from founder Josh Gatewood. You see, Josh Gatewood's story is one of the underdog's, a fellow who pursued and ultimately attained the American dream. With just a few dollars in his pocket, he fought relentlessly to get on his favorite show: Who Wants to be a Millionaire, and actually won some pocket change out of it. From there, he turned those profits into a business plan, studying the art of fried chicken tenders in Tennessee and moving back to NYC to make 'em in a food truck. Since 2013, Yankee Doodle Dandy's has been a major success, with three trucks in their tasty takeover. Get those perfectly tender, perfectly crispy chicken tenders in their sammie with signature Spirit of '76 sauce to get a taste of success, or try out their other famed entrees; Yankee Doodle Dandy's got a burger hot and fresh off the grill, along with grilled cheese and tuna melts on Texas toast. Drool worthy? Absolutely. Find Yankee Doodle Dandy's in New York, NY, or have 'em out to cater your next event. They won't disappoint. MUST TRY Winner Winner — This star spangled entree features four of their famed hand breaded chicken tenders, served with hand cut fries, Texas toast, a cup of Spirit of '76 sauce, and homemade potato salad.