Visiting local food trucks is an easy way to support local businesses or try out new cuisine. And food truck catering in San Fran lets you share your favorites with family, friends, and coworkers.

Hungry for some hand-held deliciousness?

When your stomach starts rumbling, the only cure is more tacos. These 8 San Francisco taco trucks deliver tons of flavor, ranging from authentic taco carts with classic burritos to taco pop-ups that celebrate how tasty fusion cuisine can be.

Looking for something specific? We’ve added a “best for” section at the end of each description to pinpoint the taco truck that best suits your current craving.

Why is the food from Canasta Kitchen so good? Ask the owners of this super popular SF taco truck and they’ll tell you, “es porque lo hice con amor!” Their food is good because they made it with love.

Chef Ivan Tellez brings recipes from his family’s own restaurants and butcher shops to Canasta, cooking up everything from fresh takes on classic nachos, burritos, and empanadas to signature dishes like the Taterrito that piles traditional burrito toppings on crispy tater tots.

Another truck favorite is huarache, an oblong-shaped fried dough made with masa and topped with your choice of meat, Oaxaca and cotija cheeses, shredded lettuce, pico de gallo, tomatillo, salsa, and sour cream.

Breakfast favorites include a potato and egg burrito with black beans (perfect for vegetarians), and a French toast platter gives more sensitive palates a familiar option.

Add in refreshing beverages like jamaica (a tart-meets-sweet hibiscus flower tea), lemonade, and spiced-up horchata and there’s a little something for everyone.

Head over to Canasta Kitchen for more info on where the company’s taco trailers will be. Or you can visit the brick-and-mortar locations in Concord and Alameda.

Since it first burst on to the San Francisco scene with its taco cart nearly 20 years ago, Tacos San Buena has developed a reputation for being one of the most reliable sources for Mexican food in the entire Bay Area.

Classics like tacos, burritos, and quesadillas make up the majority of the truck’s short menu, but it’s the tortas (essentially a Mexican sandwich) that keep hungry San Franciscans coming back for more.

Its Torta Al Pastor is practically legendary. Expect a mouthwatering stack of marinated pork piled high on a telera roll that’s crisp on the outside and beautifully tender inside. Lettuce, tomato, onions, salsa, and cilantro come standard.

This iconic San Francisco taco truck empire has grown to include four taco trucks which are usually located on Pacific Ave., Harrison St., 16th and Shotwell, and on Sansome St. near Bush.

Check out Tacos San Buena to see which neighborhood they’ll be pulling up to next.

Variety is the spice of life, or at least that seems to be the theme at Licensed 2 Grill.

But there are plenty of taco and taco-inspired options, too. Build your own street taco by choosing a protein that’ll be topped with salsa verde, onions, cilantro, and cotija cheese or go for an Americanized Cali Taco that includes sour cream and a soft flour tortilla.

Head over to @licensed2grill to stay up to date with deals and new menu offerings, or check out the brick-and-mortar location off of Manor Boulevard..

Best for: Groups Interested in Tacos and Other Types of Fusion Cuisine

Authenticity is the name of the game for the folks behind Blue Iguana Taco Truck. The menu is fairly simple, focusing on traditional offerings built using high-quality ingredients that make this one of the most respected taco trucks in San Francisco.

Blue Iguana encourages customers to choose a format—for example a taco, burrito, quesadilla, or bowl—and then choose a protein. The truck will add traditional condiments and garnishes like sour cream, guacamole, salsa, cotija or Monterey jack cheese, onions, and cilantro.

There are also signature creations such as the Cheeto Burrito, which combines a choice of meat and beans with rice, cheese, pico de gallo, and Flaming Hot Cheetos. For vegetarians, there’s the El Popeye, a quesadilla stuffed with grilled spinach, mushrooms, onion, and cheese.

For up-to-date locations, check out Blue Iguana’s website, but its fleet of trucks are usually found in the Excelsior District and Daly City, plus it has deals with several delivery platforms to bring tasty tacos straight to your front door.

What happens when Hawaiian food and Mexican cuisine join forces? One of the most interesting taco trucks San Francisco has to offer, Locos Only brings together two seemingly separate flavor profiles to create an entirely new—and entirely delectable—menu.

Other popular items include Kalbi Asada Fries, sweet Churro Malasadas rolled in cinnamon sugar, and, around the holidays, an impressive selection of baked goods (Local tip: Try the Ube Crunch!).

Locos Only is usually open Tuesdays and every 1st, 2nd, and 4th Saturday at Almanac Beer Co. in Alameda, but check out their Facebook page for up-to-date location information and drool-worthy food pics.

Best for: Fans of Fusion Food and Hawaiian Flavors

You won’t find any meat at VACOS. Unlike other taco pop-ups and stands that are all about the animal proteins, VACOS is an entirely  vegan-friendly eatery.

That doesn’t mean it’s stocked up with meat substitutes, either. Instead of using soy, tofu, or faux chicken as the base for its tacos and burritos, the VACOS team does brilliant things with vegetables. The Spicy Chipotle Jackfruit Taco uses shredded jackfruit to emulate the texture of pulled pork and then then tops it with jalapeno slaw and cilantro-lime crema.

Expect similar magic from the Avocado Taco, with fried avocado as the star, and the Taco “Meat” Taco which uses farro, roasted garbanzos, and mushrooms to deliver the classic street taco taste and feel.

VACOS is usually found in the Alameda area. Check out its Instagram to see where they’re headed next.

Best for: Vegans and Those Interested in Incorporating More Plant-Based Food into Their Diets

Every day, the Street Meet Taco Truck parks outside 428 11th Street in San Francisco proper, serving hungry locals and tourists from 11 a.m. straight through until the dinner crowd peters out around 8 o’clock at night.

The base menu is made up of the greatest hits of Mexican cuisine. Choose your protein and enjoy a 3-piece taco plate with grilled onions, cilantro, and salsa or a burrito brimming with beans, rice, cheese, sour cream, and guacamole.

The mobile taco stand also serves a vegan burrito and a vegetarian burrito, or you can try a surf-and-turf mixed plate with grilled steak and shrimp and traditional accompaniments.

Best for: Fast food (Street Meet says they can churn out a burrito in under 2 minutes) and Authentic Mexican catering

In true food truck style, El Alambre has a chalkboard menu that’s updated regularly, but the basics largely stay the same. Patrons choose from a list of proteins that includes carne asada, al pastor, carnitas, chorizo, tripe, shrimp, chicken, and vegetarian options and then select from classic dishes like tacos, burritos, and quesadillas to complete their order.

But the real draw is the dish that gives the truck its name. Alambre is a sort of Mexican hash that usually includes grilled beef, chopped bacon or chorizo, bell peppers, onions, cheese, and salsa, served with either flour or corn tortillas. El Alambre’s version contains carnitas, and you can skip the tortillas and have your alambre served over fries instead.

Another El Alambre favorite is their birria tacos, featuring tortillas filled with stewed meat and cheese, fried until crisp, and then dipped in a fatty consomme made using the broth from the stewed meat.

There are currently two El Alambre trucks. One serves up grub Monday through Friday at 1188 Franklin Street. The other sits at 1800 Folsom St. (near 14th St.) and is open Monday through Saturday. Check out the El Alambre Instagram for food pics and updates on truck locations and hours.

Best for: Lesser-Known Traditional Dishes Like Birria and Alambre

Bring the Tasty Goodness to You!

You’ve scoped out all these awesome taco trucks–and maybe a few more–and found your favorites. Take the next step in your food truck journey, and consider having a taco truck cater your next big event.

Whether you want to put your own twist on a wedding reception or add some authenticity to your Cinco de Mayo party, our partner trucks can cater any event, big or small. 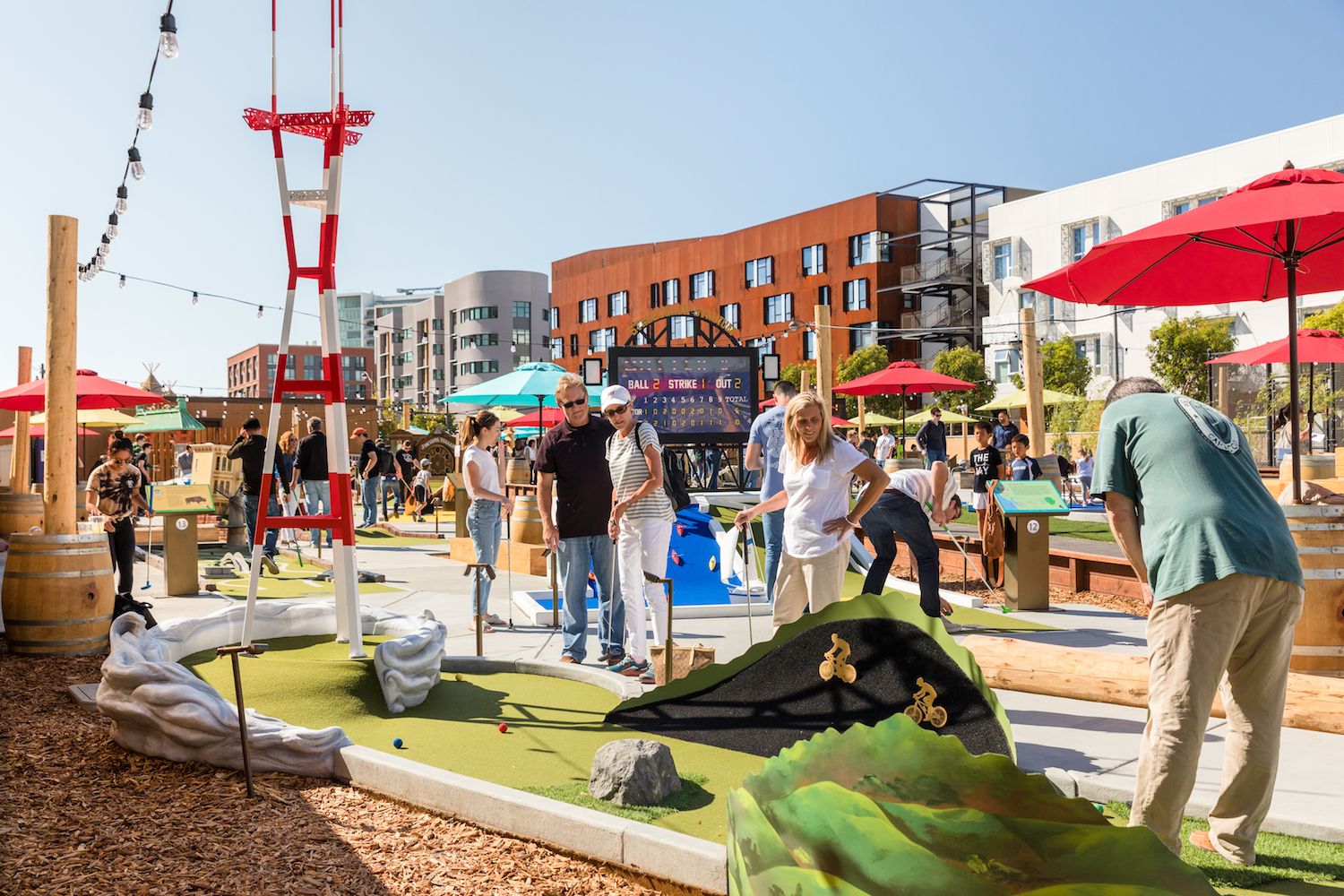 SF is known for being on the cutting edge of food and culture, and its food truck scene reflects just...