This week’s Featured Food Truck brings great food along with a delicious international experience. Wafels and Dinges runs a number of trucks and carts in New York City, serving up anything from traditional Beligian waffles to – dare I say, Brussels sprout ones! Roaming Hunger got the chance to speak with the Special Envoy for Wafels, Thomas DeGeest, and boy did he have us drooling. Read the interview below to find out what a wafeloon is, how DeGeest stuck it to the man, and what drunk people like to eat (hint: not waffles). Roaming Hunger: First of all, can you explain the name of your truck to those of us who don’t know what “dinges” means?

RH: And you pronounce it ding-us?

RH: What inspired you to quit your job at IBM and start a food truck?

TD: Well, I was never the kind of guy who dreamt to become a waffle vendor. It came about when my then girlfriend and now wife was thinking about moving to Brazil, and um, I liked her! I wanted to go with her but I didn’t know what I was gonna do in Brazil. So I thought, “why don’t I just open a waffle stand in Brazil?” and make money that way! At the end of the day, the whole Brazil move didn’t happen, but that part of the conversation took us to New York. We were planning on opening a store, and our plans were pretty far along. But then I heard from a friend that there was a truck for sale in Jersey and I picked it up. It was a 1968 Chevy truck, and that was the start of it. We were actually very lucky to not start a store. The fact that we started with a truck was very good, A. because the numbers for leases are very high in New York. B. It really allows me to get to know my wafeloons…my people! We’ve been able to figure out what works and what doesn’t work. Late nights and party crowds…when they come out of the clubs they don’t want sweets, they want meat. So, we really like people who want dessert after dinner. But there’s also the fact that there’s this guy who works for IBM and then one day puts on an apron and goes on the street with the people. I think people liked that someone was willing to put their finger up to corporations and say, “You know, I’m gonna do my own thing.”

RH: Like you said, one of the great things about having a truck is that you get to know your customers really well. How has your menu evolved to fit your customers’ desires? For example, I noticed a corn waffle with chili on your menu, I’m pretty sure that’s not a Belgian tradition!

TD: We started with the idea of straight Belgian waffles with toppings. But one day someone walked up to me – a guy who had a barbeque smoker and he said, “You know I really love your waffles, but you have to try my barbequed pulled pork as a topping.” So I told him to bring his ingredients one day and we’d test it. I loved it! Everybody loved it! So we tried it as a weekly special, and it eventually became a menu item.

TD: Last week we had a catering event for a guy’s birthday party. The guy invited four food trucks. The guy loved brussels sprouts, so he came to the truck and said “you know guys, we’re gonna make it a little more difficult for you because we want you to serve brussels sprouts.” And we were like, “Oh my god this is impossible.” But we came up with a pretty great recipe for a brussels sprouts with bacon waffle, and I think its gonna make a really good breakfast waffle. It’s sort of between a waffle and a quiche, you know?

RH: It sounds good to me!

TD: It’s good. It’s really good! But that’s the thing about this business; you keep your eyes open to anyone who likes food! TD: That is a big cultural difference. And it’s interesting because our biggest market in New York is afternoon and late night. People substitute a waffle for a brownie or their Starbucks, so people have started to figure it out. But culturally, it also turns the other way. We’ve added the bacon waffle to our menu, and all the Belgians on my team love eating the bacon waffle for breakfast, which is something they never did before! RH: Speaking of people who work on your truck, what’s the behind-the-scenes dynamic on any given day? TD: I don’t think I’ve ever seen someone be unhappy with their waffle. Because we don’t serve functional food. We don’t serve pizza or shish kebab or sandwiches. It’s not functional. People don’t come to the truck because they’re really really hungry. I think they come to eat a waffle because they want five minutes of fun and relaxation. We try never to rush a transaction. We try to take our time, which usually slows up the line. You know, a lot of trucks try to hurry up the line, but then people don’t remember their experience and they don’t say “I gotta come back.” RH: Well I just have one more question. What is your favorite waffle and dinges combination?

TD: I’m still Belgian, so my favorite is actually the plain Brussels waffle with powdered sugar. I love to taste just the pastry. The whole thing about Belgian waffles is that they’re so good, you don’t really need toppings. DeGeest and his crew of Belgian wafel extraordinaires have been such a hit in the Big Apple that they’re planning to set up camp without the wheels. Look for their store in lower Manhattan this October!

And check back tomorrow for a closer look at the Wafel and Dinges batter. We’ll be releasing their not-so-secret recipe for their Brussels Wafel tomorrow! Until then, doe-doei (bye bye)! 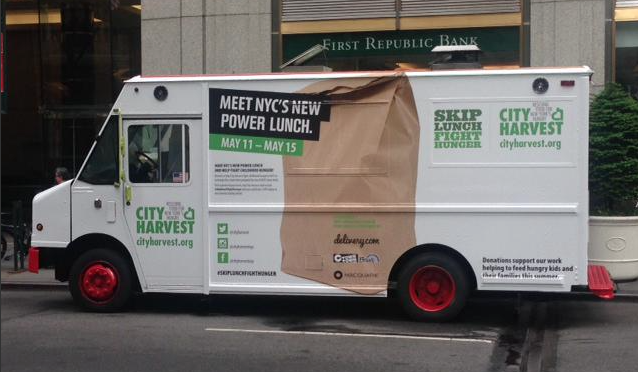 Did you know that each day 700,000 free meals are served each day in schools across NYC, that kids have... 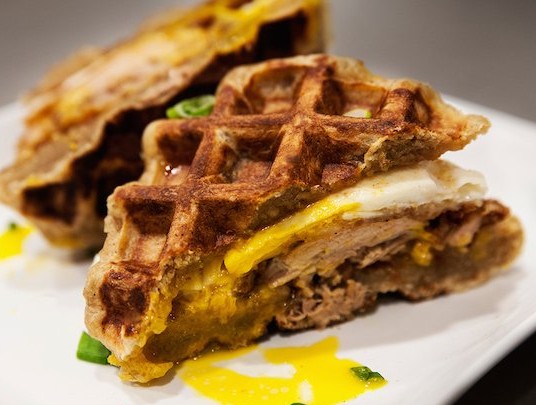 A Little Something In Between

Brunch - a time for those who aren't quite the crack of dawn early risers and for those with stomachs...