This time of the year, everyone is watching and discussing the World Cup, an event that is finally picking up steam in the US. The increased interest in The World Cup has reminded me of how drawn I am to food trucks that fuse different cultures together. One truck that comes to mind is Senor Sisig, a Bay Area-based food truck whose influences derive from the Philippines and Mexico. Both countries center their culture around savory, rich, home-cooked meals that are made to bring friends and families together. Definitely a winning concept! I had an awesome opportunity to meet with Gil & Evan, the creators and owners of Senor Sisig, right after they celebrated their 4-year anniversary. As they prepared a few dishes, I talked with them about their amazing concept, that has led to 3 reputable Senor Sisig Food Trucks in the Bay Area. Gil and Evan were high school friends growing up in Daly City who both came from families that were heavily influenced by food. After high school, Gil graduated from Le Cordon Bleu Culinary Academy and Evan received his MBA from San Francisco State. Shortly after, Evan approached Gil about the possibility of starting a food-based business together, and thus Senor Sisig was born.

Gil brought forth the vision of making tacos filled with Sisig, a Filipino dish that is made by marinating grilled meat, for at least 24 hours in a soy sauce, vinegar, garlic, and citrus mix. Traditionally, Sisig is made using meat from the face of a pig but, in order to add a modern twist and appeal to the masses, Senor Sisig prepares the dish using diced pork shoulder instead. When I asked Gil why he wanted to use Sisig, versus a more well known dish Adobo, he simply stated that he wanted to showcase a dish that isn’t commonly known outside of the Filipino community, and to allow people to experience the eccentric flavors of it. He added, “Plus, It’s great in a taco!” and I couldn’t agree with him more.

Senor Sisig started off as a catering business, focusing on what have become their signature dishes: Sisig Tacos and Sisig Burritos. They have since expanded to 3 food trucks that can be found on a daily basis at various events around the Bay Area. The Senor Sisig menu has expanded as well to include Sisig Fries, Nachos, and Salad (for the carb-free patrons), not to mention Sisig made with chicken or tofu, for non-pork eaters. If you haven’t had the chance to experience Senor Sisig and all of its glory, or you just can’t get enough, you can check their truck profile here.   Brian Chan

A Little Something In Between

Brunch - a time for those who aren't quite the crack of dawn early risers and for those with stomachs... 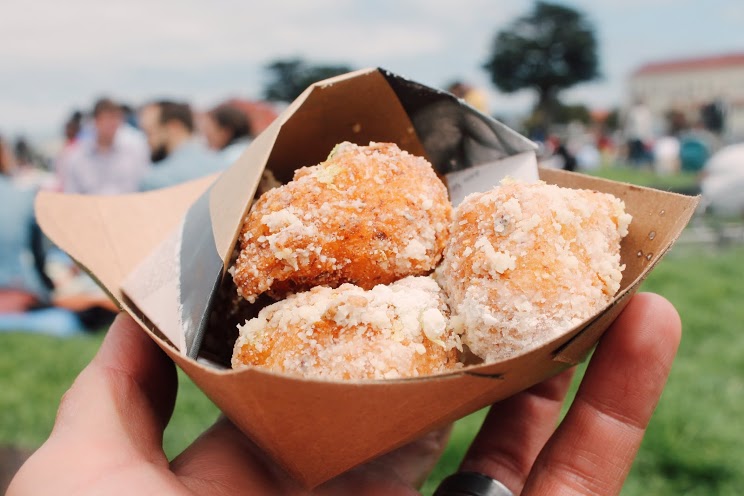 This months' theme is "The Sweet Tooth",  a time for Roaming Hunger foodies to share their guilty pleasures! Since Sundays...