The Yum Dum Truck is in the neighborhood, and the open window on the side lights up the entire  block. It’s Monday night around 7:30, outside of a bar called the “Empty Bottle” in Chicago’s Ukrainian Village.  Sober or smashed, it’s difficult to miss a white truck covered with green bamboo trees parked on the corner, with the words “GET SUM” outlined in bold red letters on the hood. As we approach the counter to place an order, we see what looks like a kindergarten picture of a little Asian boy dressed up in a white collared shirt, affixed to a jar with tape. Written on the photo in permanent marker are the words “Fashion Tips”. It’s owner Jeff Wang’s tip jar and the little boy is him.

Before Yum Dum came along, Chicago lacked an authentic Chinese food truck. According to Wang, there is a food truck called “Chicago Lunchbox” that sells Asian cuisine such as spring rolls, Rangoon, and Banh Mi, but their style of cooking leans more toward Korean and Thai food. This self-proclaimed “Chief Dumpling Engineer” has only been in the food truck game for 3 months, and he is killing it with kindness…and dumplings.

With at least 10 items on his menu, Wang keeps it simple by breaking the cuisine into categories: Baowiches, Dumplings, Sides, and Desserts. Oh and we can’t forget about the kimcheesy rice balls, which are like Asian Arancini. Wang says that they are usually the first item to sell out on the truck.

“This was a mad creation stemming from my love of homemade kimchi doused with a lot of cheese,” said Wang.

You won’t be called a dumb dumb if you’ve never had bao, but you’re sure missing out if you haven’t tried it. To create bao, you need a unique mix of dough that uses both yeast and baking powder. This particular blend of fermentation is what gives bao a sublime texture of slightly dense, yet soft, bread. Consider yourself lucky when you have the pleasure of trying all four selections, which include Braised Pork Belly, Crispy Shrimp, Korean Chili Chicken, and Crispy Fish. The fat from the braised pork belly melts the minute it hits your tongue, and the crunch from the pickled mustard greens, crushed peanuts, and cilantro add a flavorsome finish.

Out of the two seafood baowiches listed on the menu, the crispy shrimp is the winner. The two thick pieces of shrimp that rest between the fluffy bun are coated in panko breadcrumbs and tossed in a jalapeno sriracha mayo that Wang makes himself. The crunch factor is a ponzu slaw, made with cabbage and pickled onions.

Keep in mind that you’re eating all of this with a plastic utensil that Wang calls a “chork.”

“It’s a combination of a chopstick and a fork,” said Wang. Only the best invention ever.

Although the bao gives us something to talk about, it should not overshadow the dumplings, especially when they are mama’s recipe.

“I believe that there’s a story to be told behind every plate of food,” said Wang.  “The reason I made dumplings the theme of the truck is because it reminds me of childhood.”

Family is important to Wang, and so is his fan base.  In fact, the name of his truck emerged from the mind of Columbia College students.

“I found out that design work is extremely expensive, so I reached out to a Columbia College Chicago professor for help instead. He was a huge food truck fan, so I decided to make the branding of my truck his class project,” said Wang.

His most adventurous item on the menu is a rich fudge brownie with a spicy kick, topped with Sriracha pecan crumble. Some might be hesitant to try, but it is putting smiles on the faces of first time Yum-Dums.

“I never would think a brownie like that would be good, but the spicy and sweet were a perfect compliment to each other,” said Joanne Drey, dispatcher for the Chicago Fire Alarm Office.

Wang has future plans, but for right now he’s focusing on his creation.  With four and a half stars on Yelp, 1,500 followers on Twitter, and the help of his food truck buddies, he has a long road ahead of him on the streets of Chicago.

Show them love on their truck profile here. 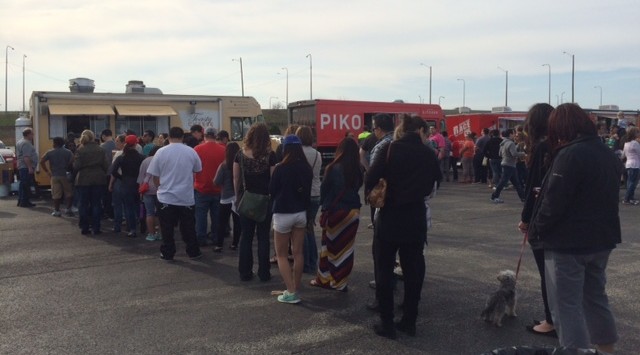