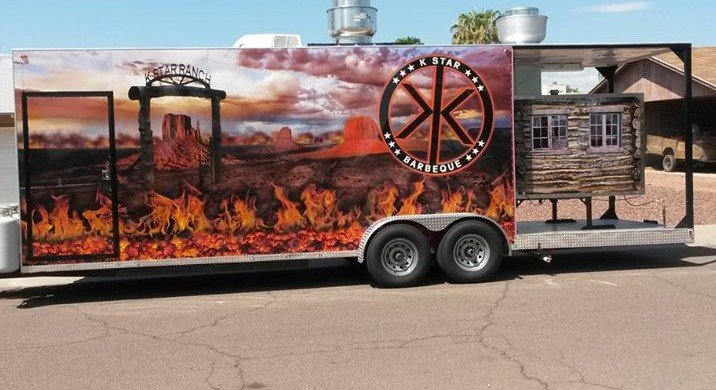 Choose your favorite of the meat (brisket, pulled pork, hot link and Ribs, when available) and then choose two sides for savory meal!

Served with choice of two sides.

Meat choice layered in a bowl with baked beans and either mac n cheese or coleslaw. Quite yummy!

Just like the Carolina Sandwich except we add a juicy and slightly spicy Hot Link sausage and top it with the pulled pork and coleslaw.

A smaller portion of meat served with 1 Hawaiian Roll and 1 side.

Slow smoked and tender Brisket served on a 4" bun

Slow smoked and delicious pulled pork served on a 4" bun

Grilled and slightly spicy served on a bun

A layer of baked beans, a layer of meat and topped with coleslaw. Item is limited to a side of chips

A hot link topped with pulled pork and coleslaw

A hot link topped with brisket and mac n cheese

Brisket and pulled pork combined for a sandwich with great flavor

Love meat? Then this one is for you! A sandwich served on a sesame bun with Brisket and pulled pork!

A wonderful mix of two great flavors the Trojan sandwich is a combination of brisket topped with mac & cheese! What a treat for your taste buds and your tummy!

The Carolina is how bbq is eaten in the south. A pulled pork sandwich topped with coleslaw makes one delicious sandwich!

K Star BBQ is serving up BBQ that's worthy of five stars. Oh, and it's also winning awards, too. During FoodStock 2017 & 2018, they were winners of the Best BBQ, including best brisket, best pulled pork and best macaroni & cheese awards. Oh, and the Best Overall BBQ trophy in A Determined's 2018 Battle of the Barbeque Competition. So when we say they've got the best BBQ in Arizona, well, the proof's in the pudding. Or the BBQ, as the case may be. Here, you're getting authentic BBQ cooked just the way it should be: low and slow over a pit to retain that smoky taste. From brisket with perfectly burnt ends to fall off the bone ribs, each meat is prepared with a specialty rub and smothered in homemade BBQ sauce to enhance that savory flavor. And no self respecting BBQ joint would serve anything but the best homemade sides, so you're getting the cheesiest mac & cheese, cool cole slaw, baked beans, and a potato salad that's chock full of bacon. If that doesn't get your mouth watering for some quality 'q, we don't know what will. So find K Star BBQ on the streets of Peoria, Phoenix and beyond, or invite 'em to bring the barbecue to your own backyard shindig. Corporate events, fundraisers, school functions, weddings and more, K Star BBQ is serving 'em all and doing BBQ better than you've ever had it. Trust us. It really is that good. MUST TRY