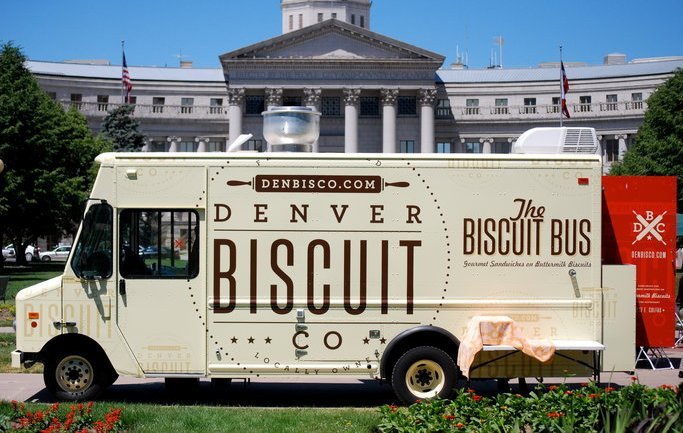 About The Biscuit Bus

Back in 2009, Drew Shader had a sudden realization that the city of Denver was in dire need of two things: 1. Its first gourmet food truck 2. Some big, buttery, fluffy, flaky biscuits He quickly took on the challenge to make it all happen, opening up The Biscuit Bus out behind his own bar; The Atomic Cowboy. With its incredibly delicious biscuit dishes, Denver’s very first gourmet food truck was an instant hit with long lines of eager foodies stretching well beyond the front door. Since this historic occurrence, The Biscuit Bus has made it to the streets and has become quite acclaimed for its fantastically tasty selection. You may have even seen it featured on The Food Network, The Cooking Channel, and CNN A few of their famous eats include biscuit sandwiches (like The Cordon Bleu with buttermilk fried chicken, Tender Belly ham, cheddar cheese, and local Colorado honey butter), platters (like the fluffy biscuit bowl filled with plump rock shrimp, creamy Logan Mill grits, and poached pancetta) and sides (like sweet potato fries smothered in gravy, as well as sweet biscuit cinnamon rolls). With all this much more, be sure to give your guests at your next event a taste of Denver’s best, and invite The Biscuit Bus to come bring some buttery yumminess!