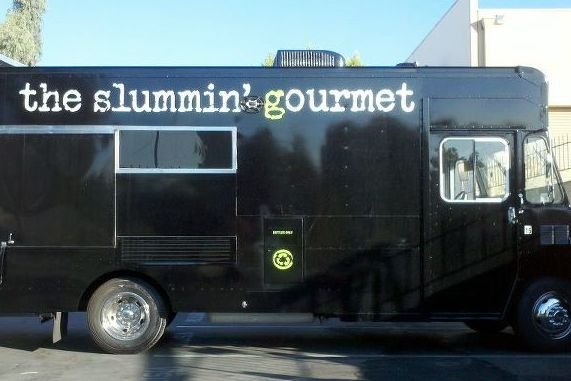 About The Slummin' Gourmet

The Slummin' Gourmet is modern bistro fare recreated for the streets... ... Fancy Without the Schmancy sometimes, you’re just hungry for good food. like, interesting snooty-tooty, fancy-pants food, but you’re so down to earth you’re above snooty-tooty, and at the moment you just don’t want to put on your fancy pants (they’re being pressed). so where’s the in-between? upscale doesn’t have to mean uppity, says chef tony, so what does he do? he proves it, in his black coat and black truck, with the slummin’ gourmet. from his ever-popular walnut shrimp tacos (just ask ken) to his kobe beef sliders (don’t you dare call it a burger buddy – but high five if you remember those, man), tony, sous chef gabe and crew crank out some of the tastiest, classiest culinary fare ever to come off a food truck. just don’t ask for silverware (you’ll get plastic). while the die-hards eschew utencils, newbies take heed: it’s okay to eat with your hands — we’ve got napkins.