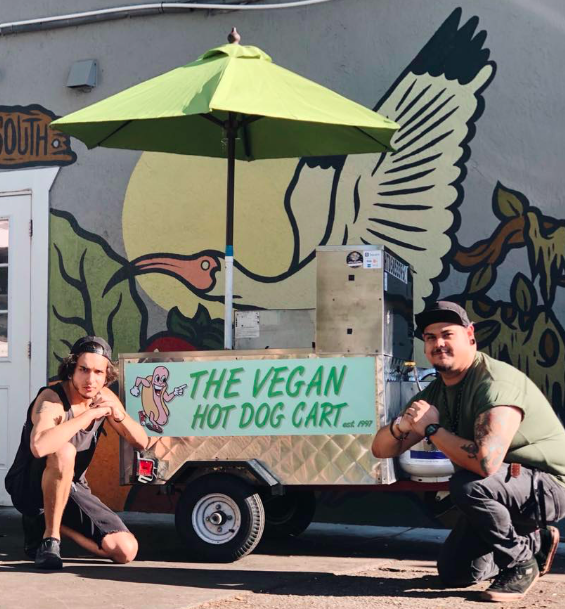 About The Vegan Hot Dog Cart

Shaun Noonan certainly had an eclectic range of careers prior to running The Vegan Hot Dog Cart. While honing his skills in the kitchen, he lived everywhere from Atlanta to Chicago to Bulgaria. Eventually, he decided he wanted to go at it on his own, but needed the funds. A long time motorcyclist, he was no stranger to the open road. So, he figured he’d pursue trucking, driving across the American South earning money and gleaning inspiration for his own foods. Eventually, he found his heart in Orlando, FL. Shaun and The Vegan Hot Dog Cart have been wowing the Sunshine State for over 15 years now, whipping up pristine veggie dogs even avid carnivores find satisfying. If you assume a vegan hot dog is a bland one, you obviously haven’t tried the franks here. Named the number one vegan dog by PETA, these sausages are as packed with juicy, salty goodness as the real deal. Plus, they come with a wide variety of tasty toppings. Have nachos in hot dog form with the Mmm… Nachos Rule!, a decadent frank smothered in vegan cheese, 5-bean chili, pickled onions, scallions, peppers, and corn chips. Or, try the boldly seasoned Boricua Dog topped with onions, garlic aioli, banana peppers, and ketchup. And, if you hire them as a caterer, you can make a custom menu for your event. What’s not to love? Either swing by The Vegan Hot Dog Cart or book ‘em for your next event. You won’t regret it. MUST TRY Holiday Dog - Add some sweet to your savory with a hot dog topped with cranberry-orange chutney that pairs perfectly with a briny blend of Carolina BBQ sauce, fried onions, and parsley.