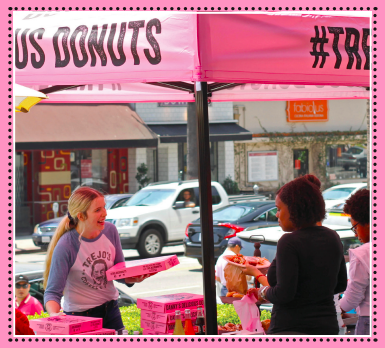 Actor Danny Trejo is famous for portraying villainous characters on screen, but he’s anything but in real life. In fact, he loves bringing people together via food, as illustrated by his budding career as a restauranteur. After establishing himself in Los Angeles’s Mexican food scene, Trejo has now decided to try his luck at dessert with Trejo’s Coffee & Donuts. This adorable cafe is giving Hollywood the gift of great confections paired with perfectly bitter brews. What’s the secret to the exemplary donuts here? They’re made fresh daily and in small batches, so you’ll never sink your teeth into a stale pastry. Each donut on the menu is warm, chewable perfection. The sheer range of choices is almost overwhelming. You can go for old-fashioned options that never go out of style, like a glazed donut or a buttermilk donut with vanilla frosting. However, for adventurous eaters, there’s a plethora of gourmet donuts with unconventional flavor profiles. For example, the nacho donut adds some savory to your sweet with jalapeños, cheddar cheese, and hot sauce. Whatever confection you pick, be sure to pair it with a piping hot cuppa joe. Mouth watering? Then swing by Trejo’s Coffee & Donuts ASAP for a sugary snack. Even better? Book ‘em for your next event. Trust us, guests will thank you. MUST TRY Horchata Donut - A warm, pillowy donut filled with horchata icing and coated in a horchata glaze.